Inside APS’s recent article, ‘April is Valley Bike Month,’ generated comments from three regular bike commuters who say the benefits they get from biking to work extend well beyond April.

Senior Marketing Coordinator Charlene Saltz bikes four miles to APS headquarters several times a week from the near west side.

“The biggest benefit for me is time,” says Saltz, “because I’m getting exercise and commuting to work at the same time. Plus, it gives me a chance to be outside and kind of unwind.”

Of the three, Construction Project Coordinator Mike Hartman has the longest bike commute. Hartman bikes 14 miles from Peoria to the Goodyear Yard, and he’s been bike commuting for the past 12 years. “Riding to work keeps me in shape,” he says. “I save on gas and mileage on my truck and I help the environment.”

The challenges of biking to work
Biking to work is not without its challenges, though, and each of these riders has had to find ways to overcome them. They have to deal with their personal safety on the road, the security of their bike while they’re at work, and one of the biggest challenges in this hot climate is finding a place to shower and change once they arrive.

Safety
Even though he was in a bike lane, Hartman was hit by a car while riding home several years ago. He says, “No matter where you ride, you have to watch for traffic.”

Saltz picked her route to work based largely on its safety. “My route’s really safe,” she says. “Third and Fifth Avenues are one-way streets through quiet neighborhoods, and the cross streets all have stop signs or traffic lights. They have really wide bike lanes, too, so I don’t feel like I’m riding in traffic. I feel very safe.” 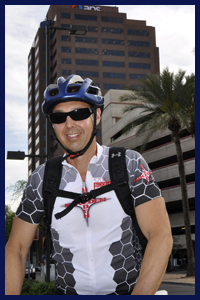 Security
Bike theft is a problem in Phoenix just like any big city, and bike commuters are often concerned for their bikes and accessories while they’re parked during the workday. Stephan, pictured at left, says he’s had good luck parking at the bike racks in the Arizona Center’s garage at APS headquarters. But he adds that he rides his ‘junker’ bike instead of his expensive racing bike when he commutes downtown.

Saltz uses the fully enclosed yellow bike lockers available at the Central Bus Station at Van Buren and Central, just a four block walk from the headquarters. The lockers are free, and riders secure them with their own locks.

A place to shower and change
Phoenix’s blistering summers make it important for bike commuters to find a place to shower and change when they arrive at work. Hartman is lucky. His Goodyear Yard has a shower he can use after his ride to work. Stephan just stops riding to work as the summer temperatures climb. Saltz’s solution to this problem was to join the YMCA at Central and Van Buren, right across the street from her bike locker. “I use the Y as my locker room to change and shower, and if I’m motivated, I can also work out there before or after work, or meet a friend for a run.”

Maricopa County is talking with the Tempe-based Bicycle Cellar about opening a downtown facility that would provide bike commuters with inside bike lockers and a place to change and shower – plus a full service bike shop. Ed Fox, vice president and chief sustainability officer, has said if that facility is completed, APS will help subsidize the cost of using it for employees who commute to work by bike. 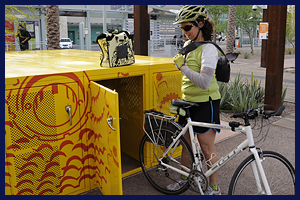 Beyond incentives
The bike commuters Inside APS spoke with say they commute by bike not because of the Bike Month incentives, but because it’s a better way to get to work. Says Saltz: “I like looking at people’s yards, seeing what’s blooming and what people are doing. Riding through these neighborhoods you see people walking the dog and kids playing after school … activities you don’t always notice when you’re driving.”

Project Description:
Under a 15-month contract with APS, I wrote for the company’s daily intranet news publication, Inside APS, and served as an internal communications consultant for a variety of APS departments. The purpose of this intranet article was to raise awareness and promote employee dialogue about alternate forms of commuting. I recruited and interviewed three employees who regularly bike to work, and shot pictures of them during their commutes.
NOTE: Links to material behind APS’ firewall have been disabled.

Disclaimer regarding this work sample:
This project sample is presented to demonstrate writing, strategic planning or other communication skills, and is not an official publication of the client company. The sample relates facts and activities at the time they took place, not current client activities. Use of the client company’s name and logo is for identification purposes only, and does not constitute an endorsement by the client – either expressed or implied – of Bart Butler, Bart Butler Communications or this sample.