Several lifetimes ago, I was a TV news cameraman for a CBS affiliate in Columbus, Ohio.

While I do more communication strategy and writing today, I’ve been involved in a lot of video productions over the years, and try to keep an eye on new tech developments.

So I’m intrigued by the current push by Nikon and Canon to introduce “professional” video capability into what have traditionally been their high-end still cameras, the digital single lens reflex (DSLR) models.

DSLR video is generating excitement among hobbyists and pro photographers alike, as:

Whichever, it’s creating a lot of conversation and activity.

People are buying the gear, and legions of photo and video “do-it-yourselfers” – folks I’ll affectionately call the “Nerdiverse” – are busily experimenting and developing accessories and adaptations to coax better video out of their still cameras.

DSLR video not quite there yet
Personally, I love being able to shoot HD video clips with my Nikon digital SLR.

But despite the buzz, I know it’s NOT yet a fully functional professional video camera.

This is not a video camera, it’s an SLR with a video mode.”


For me, gene-splicing video DNA into still cameras – mixing two species with very different roots – is going to need a generation or two of evolution before the cameras are ready for prime time video production.

Yes, the potential is exciting.

So, at least for now, if you need to generate professional results efficiently and cost-effectively, a professional video camera is, by far, your best choice.

This blog post will give you some reasons why. 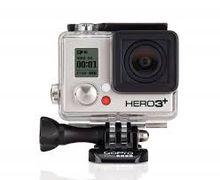 Since video went from tape to digital, there’s been an explosion of developments that let almost anyone shoot decent-quality video, including:

YouTube, launched in 2005, gave everyone a way to share all those videos through their social media channels.

The numbers are staggering: 100 hours of video are uploaded to YouTube every minute, attracting more than a billion unique visitors every month.

These videos aren’t all great – there’s a limit to what you can produce with your smartphone, after all – which means there’s an opportunity for enhancement.

Nikon and Canon change the conversation, and the video playing field
Nikon and Canon are huge, sophisticated companies with millions of loyal customers and years of experience creating high-performance products for smart, demanding clients.

They have the technical and marketing savvy to move the market.

And their DSLR video products have some things going for them: 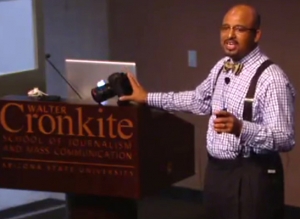 DSLR video faces challenges
Photojournalist and educator Kenny Irby recently encouraged students at Arizona State’s Cronkite School of Journalism to be early adopters of new multimedia tools, like the $5,000 Canon EOS 5D Mark III DSLR, but to also be aware of their limitations.

“This is not a video camera,” said Irby, holding up the camera. “It’s an SLR with a video mode.”

Irby, senior faculty for visual journalism at the Poynter Institute and a Hearst Visiting Professional at Cronkite, cited some of the challenges students will find as they shoot video with this camera:

“Frankencams” try to address limitations
Irby noted that because of the Nikon and Canon cameras’ shortcomings, there’s developed “a whole boutique market” for retrofitting still cameras to perform the functions of a full-featured video camera – so called “Frankencams.” He warned the students that these adaptations can easily add another one to two thousand dollars to the total cost of a DSLR.

Video producer weighs pros, cons of DSLR Video
Phoenix video producer Keith Yaskin of The Flip Side Communications says he’s been considering adding a DSLR to his professional video equipment. “For us, the biggest pro of purchasing a DSLR is to achieve a shallow depth of focus.” This allows him to keep a main subject in sharp focus while the background goes soft, an effect that’s easier to achieve with some still-camera lenses.

But Yaskin also cites some cons. “DSLRs are, for the most part, ‘still’ cameras at heart.” He’d like to see manufacturers “produce more models with the types of professional audio connections and audio monitoring that we expect from traditional video cameras.”

Yaskin recommends that anyone considering buying a DSLR for video should use one firsthand before buying. He says, “The feel of shooting with a DSLR rather than a traditional video camera might make some people uncomfortable.”

A mix of caution and optimism: The power of the Nerdiverse and the photo-video industrial complex
I’m actually very optimistic that, ultimately, these continuing DSLR developments by Nikon and Canon and others are going to shape and advance the technology and promote new innovation across all our video communication tools.

And I anticipate continuing contributions from the people who use photo and video equipment, from Hollywood and Bollywood studios to independent producers to the millions of photo and video enthusiasts around the world.

The alert companies will pick up these new ideas, and take them to market.

Potential for future development is enormous
So, while I’d currently recommend to anyone that a professional video camera would be a much better bet for shooting videos, I’m convinced that today’s experiments with DSLR video will ultimately benefit everyone who shoots video over the coming decades.

In this one ergonomically designed handle, camera-operators have a solid base for holding the camera, and also finger-tip controls for zooming, for starting and stopping recording, and for making other adjustments that create superior images.

The electronic eyepiece has a rubber eye-cup that shuts out all external light, providing a clear, bright, sharp view of what’s being shot, unaffected by ambient light or sun-glare. The eyepiece also shows readouts for audio, a red “record” light and indicators for time code, battery condition and the amount of available memory. This Sony also appears to have an LCD screen above the eyepiece.

Admittedly, it takes a variety of accessories to shoot video: batteries, wireless mic receivers, shotgun mics, portable lights, microphone cables, etc. In traditional video cameras, those accessories are integrated into the camera design, so they’re functional, compact and balanced. And all the controls are within easy reach of the camera operator.

What’s been your experience with DSLR video? How do you think this technology will evolve? Let me know by leaving a comment.