He sees his role — and NPR’s — as “creating an environment where people can discuss difficult questions.”

Greene spoke to almost 200 KJZZ 91.5 FM listeners and supporters at the Tempe Center for the Arts last Friday night, Feb. 2.

At the heart of his approach, he said, “is not dismissing people’s views, not talking down to them.”

“I want to be in the business of listening,” he said. “I want to empathize with people.

“That’s what we have to do if we want to be in the business of solving problems,” he continued.

News is not fake! 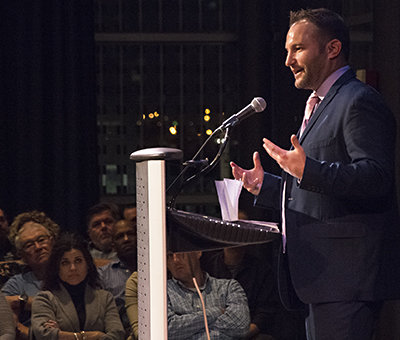 Understandably, Greene is concerned about the issue of fake news. “I’m worried, especially about young people who get a distorted view of what news is,” he said.

Like many in his generation (he’s 42), he grew up watching network news anchors like Peter Jennings and Tom Brokaw every night with his family.*

“I could trust the news to tell me what was important,” he said.

But he said that, today, people don’t know what to trust. “There’s lots of content flying around,” he said, “but we don’t know what’s reliable.” He noted how some young people get much of their news only from comedians and satirical shows.

Greene hopes to reestablish the definition of news: “If it’s fake, it’s not news. And if it’s news, it’s not fake,” he said.

He wants people to know that, at NPR, they still hold a news editorial meeting every day at 9 a.m. to evaluate the importance and accuracy of the stories they’re covering.


Greene, who started as a print journalist, said transitioning to broadcast news was difficult.

One of the biggest challenges is finding your own natural voice.

“People tell you to just be yourself,” he said. “But when you get behind that microphone, you become very self-conscious. You find yourself sounding like ‘Broadcaster Man.’ You start speaking in a voice you’ve picked up from other newscasters.” One tip he got for achieving a more conversational tone was to begin with his wife’s name, Rose. He’d pretend he was just telling her the story, then have the editor delete her name before it aired.

Writing for radio is also different, but Greene says he’s gotten lots of help on that from his colleagues. One told him to think of a radio story as a short movie. To think visually as you create the context for the story, and move scene by scene to the conclusion. 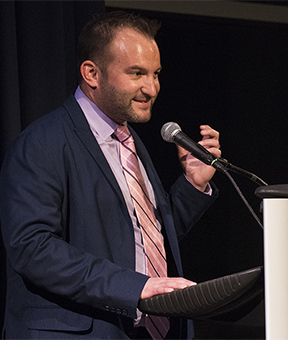 For Greene, the broadcast training built on his already extensive experience as a local reporter in Baltimore, covering the White House, as a Moscow correspondent, reporting from Libya during the Arab Spring, and submitting stories from across the U.S. during the 2016 elections.

As a co-host on NPR’s long-running Morning Edition, Greene’s a solid contributor. His sensitive interviews and his even-handed reporting do seem to “create an environment that allows people to discuss difficult questions.”